Growing evidence supports the hypothesis that people with schizophrenia experience pathological aging. This may be reflected in reduced telomere length, perhaps as a result of chronic inflammatory processes. The features of schizophrenia differ, and research into brain structure suggests that abnormal neurodevelopment and degeneration are reflected in diverse patterns of intellectual and cognitive deficit. Premature aging might also contribute to the increased prevalence of comorbidities and shorter life expectancy associated with the disorder. 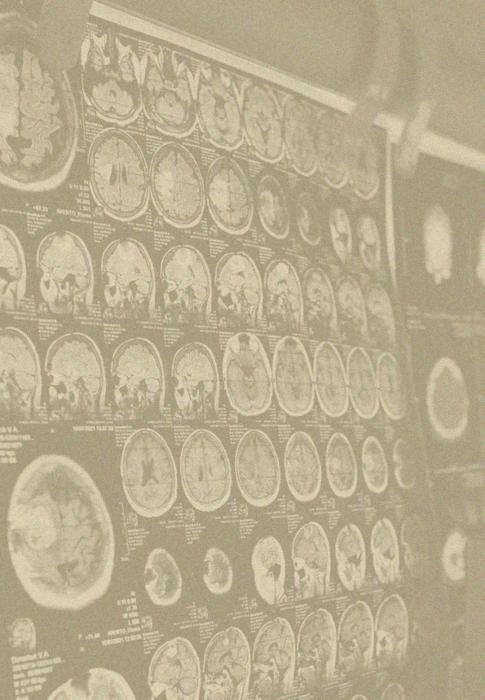 Over the course of schizophrenia, there is typically a decrease in the size of brain structures. Intriguingly in terms of potential etiology, there is evidence of increased levels of mediators of inflammation and oxidative stress in the serum and plasma of affected individuals, when compared to healthy controls.

One of the first meta-analyses (by Potvin and colleagues in 2008) reported that of 19 studies investigating levels of interleukin-6 (IL-6) in schizophrenia, 16 had found at least a small increase relative to controls.1 Overall, Potvin et al also found increased levels of IL-1RA and sIL-2R, and a lower level of IL-2. They comment, however, that a role for disease-associated stress and weight gain in the abnormal cytokine profile of patients cannot be excluded. Subsequently, Miller et al reported higher levels of cytokines during an acute exacerbation of schizophrenia and noted that levels fall with treatment.2 There are similar findings with mediators of oxidative stress.3

Such findings have led authors to consider immune system-mediated mechanisms that may cause or contribute to psychosis.4

“Immune system-mediated mechanisms may cause or contribute to psychosis. Central to this is the activation of microglia.”

The consequences would be abnormal neurodevelopment, neurodegeneration, and the presence of positive, negative and cognitive symptoms characteristic of schizophrenia.

Elements of this picture are supported by animal data, as in the work of Ribeiro et al (2013)5 who demonstrated progressive microglial activation and an increase in iNOS expression in rats subjected to a neurodevelopmental model of schizophrenia. Importantly, these changes could be reversed by clozapine.

Interest in blood-borne factors that may influence aging in people with schizophrenia was stimulated by the striking findings of Villeda et al who performed a series of experiments in which young mice shared the circulation of old animals.6 Young animals exposed to plasma from old mice showed age-related brain changes, notably decreased hippocampal neurogenesis and synaptic plasticity, and impaired memory.

The authors identified certain chemokines – including eotaxin (also known as CCL11) – whose plasma levels correlated with reduced neurogenesis in mice exposed to the blood of older animals. They also showed that increasing levels of circulating eotaxin in young mice resulted in decreased neurogenesis and cognitive deficits. Relevant to normal aging – and perhaps accelerated aging in schizophrenia – Villeda et al note that eotaxin levels in human plasma and CSF rise with age.

Pedrini et al assayed levels of eotaxin in the serum of people early or late in the course of schizophrenia, comparing each group to healthy controls.7 Early in the disease course, eotaxin levels were only marginally elevated relative to controls (Figure 1). However, the difference versus controls was large and significant in late-stage patients (who, typically, had had schizophrenia for twenty years). 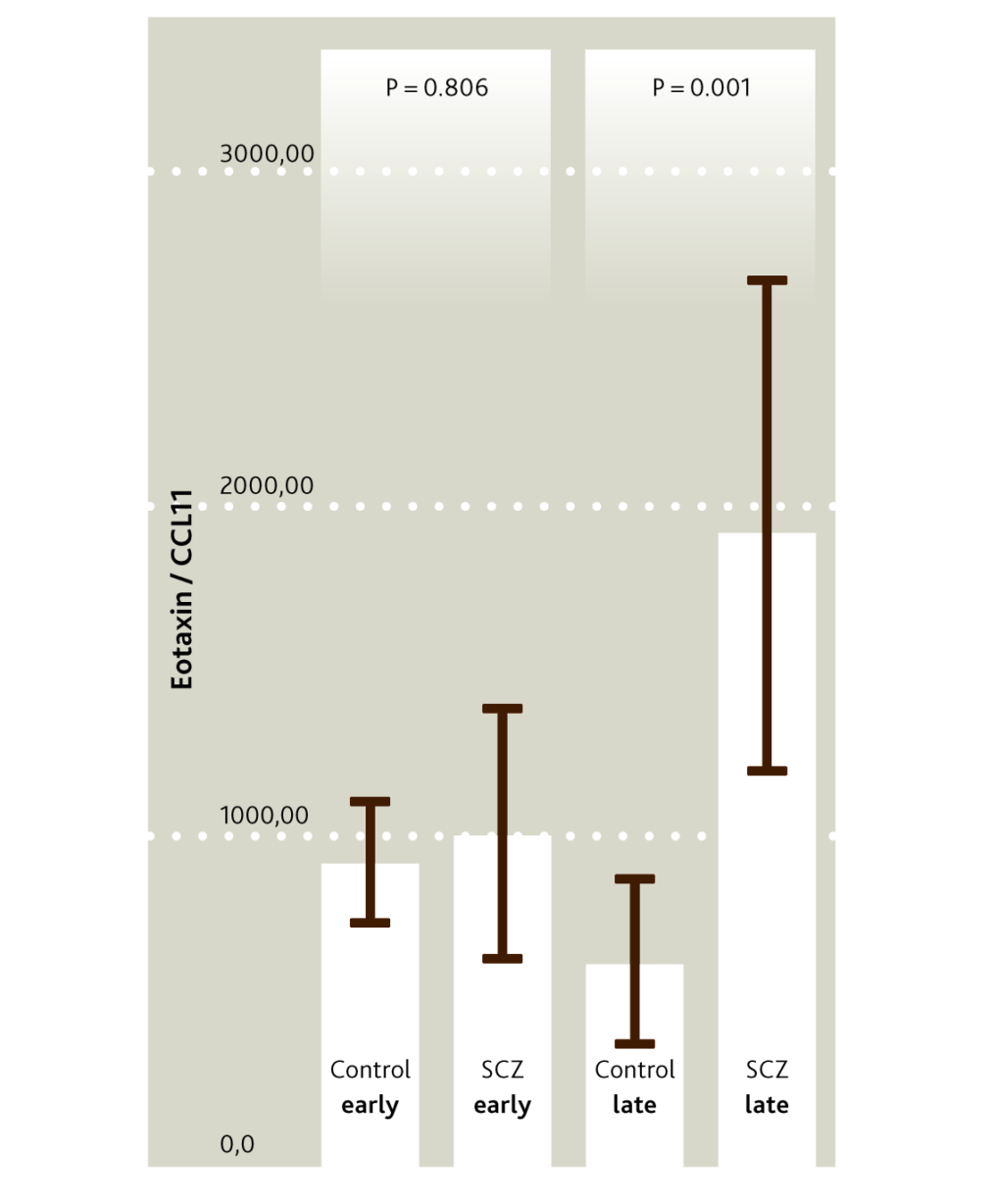 In addition to its association with decreased hippocampal neurogenesis and impaired learning and memory in mice, eotaxin has chemo-attractant properties (for eosinophils, for example) relevant to inflammatory mechanisms.8

A tale told by telomeres

Since telomere erosion occurs with cell division, shortened telomere length is another characteristic of aging, though it can also be induced by environmental insults.9,10 In a meta-analysis of studies investigating leukocyte telomere length (LTL), Rao et al found that LTL among people with schizophrenia was significantly shorter than in controls – though the authors caution that all data were cross-sectional, and say that longitudinal studies are required to demonstrate progressive LTL erosion with longer disease course.11

Czepielewski et al compared healthy controls against people with schizophrenia (who had had the disorder for a mean of 14 years) and the siblings of those affected.12 Mean telomere length in people with schizophrenia was significantly shorter than in healthy controls but not shorter than in their siblings. The authors suggested that increased immune cell replication during inflammation might be the factor responsible for telomere shortening.

Černis et al proposed that schizophrenia patients with high intelligence might form a distinct sub-type within the disorder.13 This prompted Gama and colleagues to investigate the possible relationship between intellectual functioning and cognitive performance and brain structure.

Using age and sex as covariates, patients with good IQ did not differ significantly from healthy controls in total intracranial volume (ICV). This was true irrespective of cognitive status. However, patients with both poor IQ and poor cognition had reduced ICV relative to other groups. Using age, sex and total brain volume as covariates, patients with good IQ and good cognition were again not different from healthy controls in total cortical gray matter volume and in cortical thickness. However, those with poor cognition – irrespective of IQ – had less gray matter than controls.

The same group has reported on 94 healthy controls and 92 people included in the Northwestern University Schizophrenia Data and Software Tool (NUSDAST).14 Subjects underwent neuropsychological assessment and structural MRI. Data from people with schizophrenia were analyzed by group according to cognitive performance and estimated premorbid IQ.

These different patterns of structural change led the authors to suggest that people who show impairment of both IQ and cognition have broad alterations in the brain indicative of early neurodevelopmental disruption. However, impaired cognition with intact premorbid IQ suggests cortical changes due primarily to neurodegeneration.

To see if the hypothesis of accelerated aging due to inflammation in people with schizophrenia would be supported, Gama and colleagues asked whether telomere length (a marker of aging), eotaxin (a marker of inflammation) and gray matter volume were more strongly related in people with the condition than in healthy controls.15 They looked at eotaxin levels in blood and structural MRI in 64 individuals with schizophrenia and 48 healthy controls.

“People with schizophrenia had decreased telomere length and gray matter, higher levels of eotaxin, and worse memory performance. These variables were not significantly correlated in healthy controls”

In patients with schizophrenia, we therefore seem to have a cluster of connections (see Figure 2) between longer duration of illness, raised levels of eotaxin, decreased telomere length, and reduced gray matter volume – and indeed also with impaired performance in episodic memory, which Gama and colleagues also investigated. 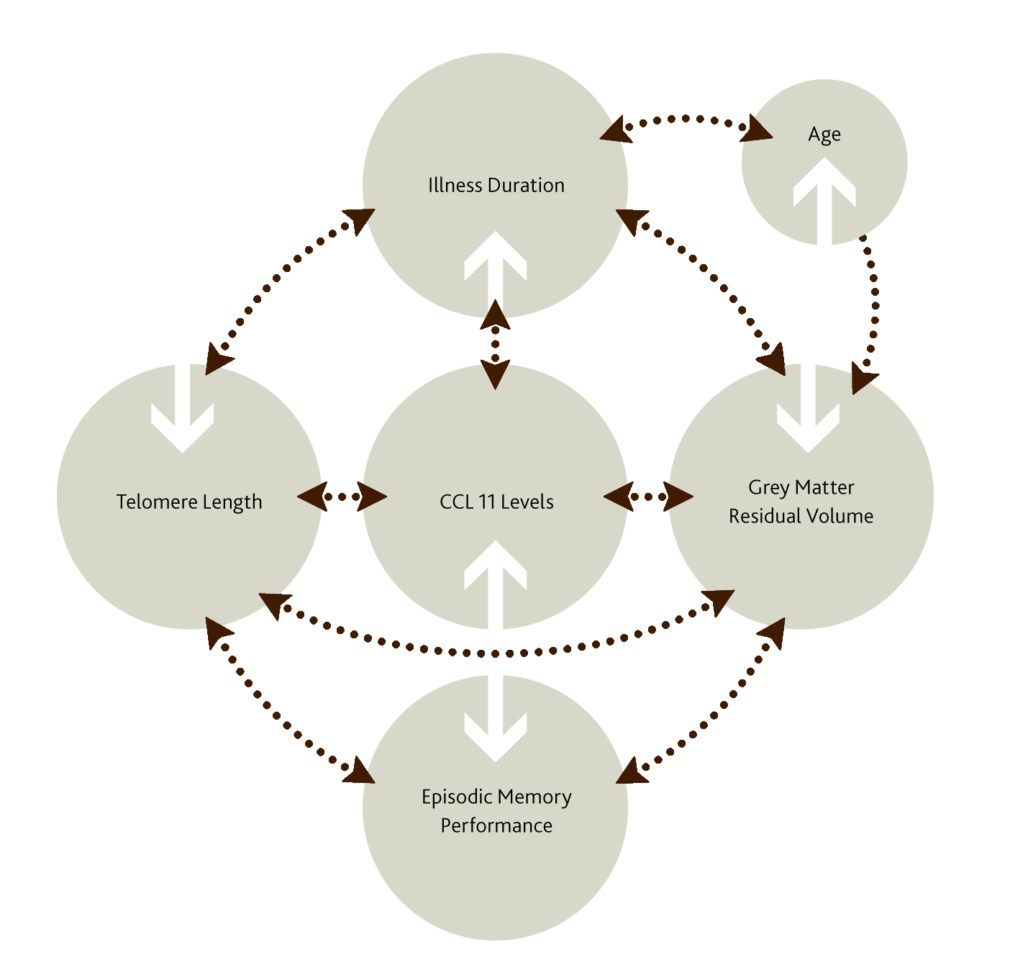 In patients with schizophrenia, there appear to be connections between longer duration of illness, raised levels of eotaxin, decreased telomere length, reduced gray matter volume, and impaired episodic memory.

In conclusion, there is a pattern of results consistent with the idea that people with schizophrenia experience accelerated aging. This is reflected in reduced telomere length and possibly linked to chronic inflammation, and contributes to poor outcome including premature cognitive decline.

If these ideas can be substantiated by further work involving larger groups of patients and longitudinal studies, it would seem that Emil Kraepelin may have had a point when he popularized the term dementia praecox for the condition that became known as schizophrenia.

We would like to thank Clarissa Gama, Universidad Federal do Rio Grande do Sul, Porto Alegre, Brazil, for sharing her expertise around accelerated aging in schizophrenia with us and for her support in developing this article. 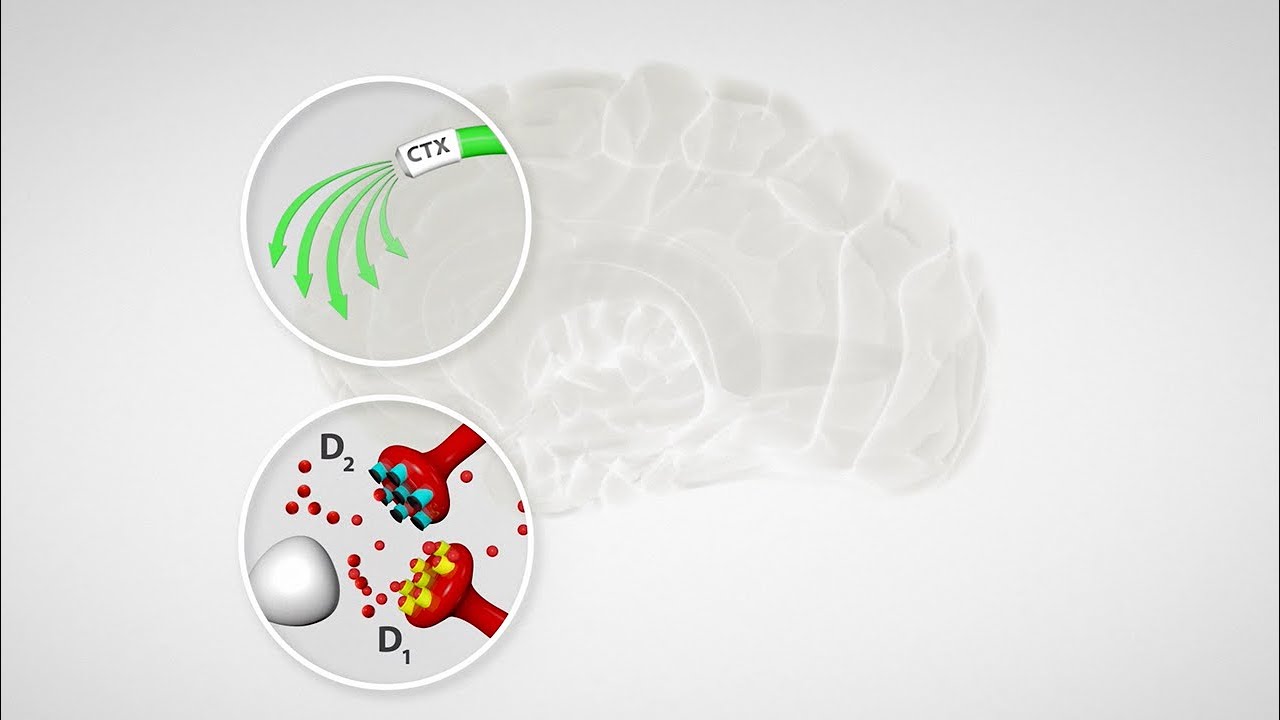 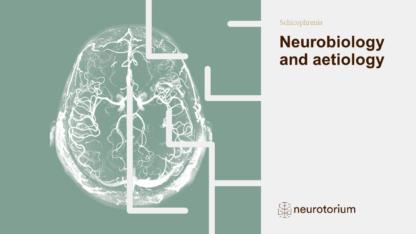 Permissions for creative use of the resources from Neurotorium

Permission is granted to download images, slides and videos and use them in your own presentations, provided that copyright notices and the Neurotorium logo are not hidden or removed. For use in publications and on websites, proper attribution must be provided together with a link to Neurotorium.org

The content on our platform is regularly reviewed. Here you’ll find listed all the reviews of this material keeping it up to date.

Professor of Psychiatry at The Donald and Barbara Zucker School of Medicine at Hofstra/Northwell, Director of the Institute of Behavioral Science, Feinstein Institutes for Medical Research

We have detected that you are from “France”. You have the option of switching the language to French, if you would prefer that?.

Please enter your details below.

Fill in you information below and stay up to date with the latest content on Neurotorium.